The dugong, or ia tekwa in the Lau language, is a taboo animal for the people of Bailangi and Buni tribes. For ages, it has been forbidden to eat dugong. This taboo is based on a legend of a woman, who jumps into the sea and changes into a dugong. Since then, people of the two tribes have refrained from eating dugong. Not only that: relatives who ate the marine mammal after the incident suffered from swollen feet and painful bodies.

In a visit to Lau Lagoon this year the Malaita Star Chief reporter BIRA’AU WILSON SAENI interviewed Chief Simon Ben who shared the story why the Lau people do not eat dugong and treat it as a taboo up to this day. According to Chief Ben this is a true story that happened in Lau Lagoon long before the first European contact on the island Malaita.

“The woman who changed into a Dugong was from a place called Bailangi. She got married to a man from Gwaihareko. The girl got married to the boy after several attempts of the boy’s parent to find a bride for their son failed.

The boy’s parent first negotiated with the Hunufou people, and tried to convince them to permit a girl from their tribe to marry their son. But the girls from Hunufou refused the request. In north Malaita, girls want to married to a person who knows how to farm taro and yam and knows how to fish. Those are the basic characters that young girls in the olden days were looking for in a boy before they decide to married.  The young girls from Hunufou saw nothing in this boy.

After this failed attempt, the parent left Hunufou and continued their search for a wife for their son in Bania, another village on the mainland. But the Bania people wanted to know the character and capabilities type of the boy. Then the parent went to Gounasu village which also located on the mainland. But also the people of Gounasu refused to give the boy’s parent green light.

The parents then took a canoe and paddled across to the islands in the sea to a place call Walo to try to find a potential wife for their son. At Walo someone by the name of Kilo said that if the boy is from the sea, they will allow a girl from Walo to marry him. Unfortunately, the boy was from the bush, so the request was denied because the saltwater people want to keep to themselves.

The parents and their boy refused to give up, and turned back to the mainland once again. In Bailangi a pretty young girl agreed and told her parent that she was willing to marry the boy. Both sides agreed. The boy’s parent engaged the girl with two shell money strings. This means that during the bride price day they would give up to twenty shell money as a form of bride price.

They settled the bride price and the girl turned into a woman. She came to the village of Gwaihareko to live with her husband. They had good marriage: they didn’t fight and cared for each other.  The couple conceived a child, a baby boy. The girl was working hard and very strong. She was the type of a girl that every man would dream of marrying. Whatever task her mother in-law would give her, she would finish it before the sun goes down.  She worked with dignity, passion and responsibility for her new family. She was impressive in her duty as young mother.

After gardening, her mother in-law would always ask her to bring back some firewood. Even if the load was heavy, she would carry it without resting and complaining. She impressed her mother in-law with her strength. Her attitude towards work also caught the eyes of the community members.

After their work in the garden, the mother in-law prepared the load to take back home. Without letting her daughter in-law know, she placed a heavy red stone known, locally as Mae Nagi, and put it in her bag.

When the girl lifted her bag, she noticed that the bag was very heavy, but she refused to check it because that would show disrespect to her mother in-law. So she just kept silent. She moved a short distance but had to stop and rest because of the excessive weight. Normally she would never rest; she would carry the load on her back and go straight to the village without any stop along the way.

But this day, she rested many times along the way. She struggled to carry the bag to the village. The nasty mother in-law watched her suffering.

Bit by bit she carried the heavy load to the village. Upon arrival she threw the bag down, and the red stone fell out of the bag. The girl was very surprised when she saw Mae Nagi hidden among the harvest and the firewood. She got really angry when she realized that her mother in-law  played a dirty trick on her.

She lost her trust in the family. The bond that she created was ruined by the evil trick of the covetous mother in-law. She did not work that evening. She cried and folded her traditional umbrella (Kaufe) under her armpit and walked down to the sea side.

Her husband begged her to stay and forgive his mother for what she had done to her. He offered her compensation, a pig, shell money and dolphin teeth, but she refused.

She walked down to where the sea meets the land and sat down on a stone call Fou Sualana.  She cried in sorrow and wished to die so that the pain and grief would go away. “After all the good things I have done, this is what your mother has done to me” the wife told her husband.

“I will leave you so that your mother can look for a better girl to marry you and make her happy and satisfied. All my sacrifices are wasted; your mother doesn’t accept me. If she can trick me this way, then most definitely she is capable of killing me”.

She cried and started to draw different marine animals on the large stone.  First, she drew a turtle. But she said she did not want to change into a turtle because it is very easy to catch it, and she didn’t want to be eaten by her own people.

Second, she drew a dolphin. But she said she did not want to change into a dolphin, because the dolphin lives in the deep blue sea and her husband would never see her again.

Then she drew a dugong.  She looked at the creature and was impressed by its size and strength. The ia tekwa can destroy nets, and lives close to the shore so her husband could see it. Moreover, the dugong looks much like a human: the female also has breasts.

When she was almost finished with drawing the dugong, her husband showed up with the baby. He told his wife to get up and follow him back home to breast feed the baby. She refused and instructed her husband to go back and look after the baby. She then told her husband is to tell his mother to look for another wife for him, a girl strong enough to carry a stone on her back. “Today I will go away from you; I will go into the sea and change into this animal”. She pointed to the dugong that she had drawn on the stone.

She then jumped into the sea.  When she reappeared on the surface, she had turned into a dugong.

Her husband and son shed tears and walked back home, heartbroken. All this happened because of the mother in-law act of jealousy. That is the reason why the two tribes, Bailangi and Buni, don’t eat dugong. 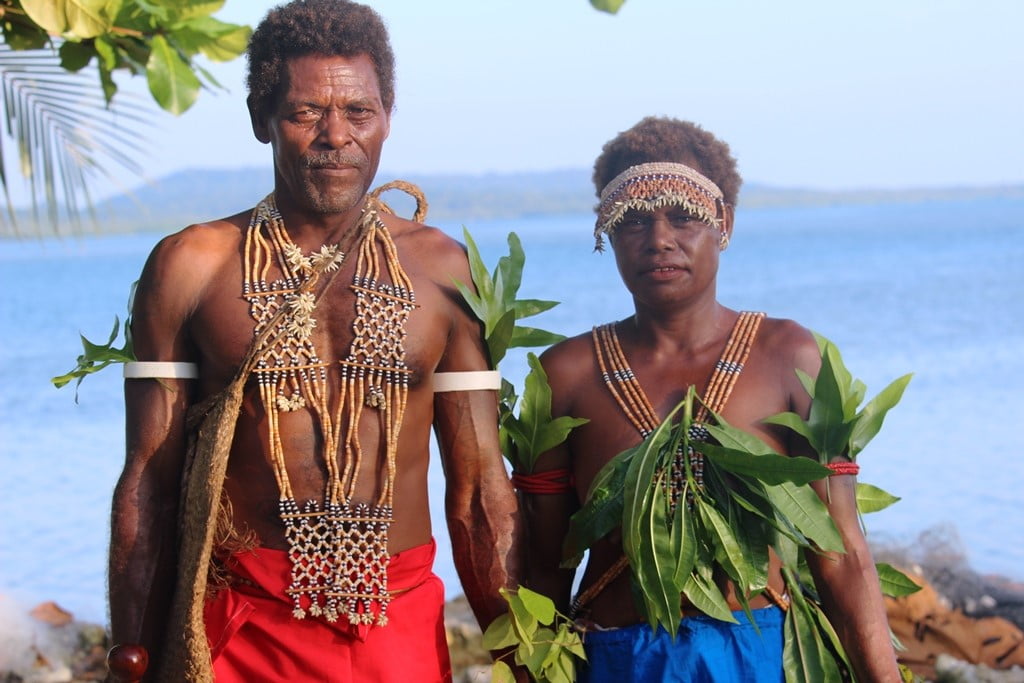