Aerial Surveys in Mozambique Reveal Marine Mega-fauna (and the firsherman who may be targeting them).

Dugongs are hard to spot – especially from a boat. Even if you managed to see a dugong from a boat, you wouldnt know how many lived in a given area.

Aerial surveys, from fixed wing aircraft, are great ways to see the big picture. With a bit of science – and experience – important questions about dugong populations can be answered.

These surveys need to be well-planned, not only because planes are expensive to fly. One must select the area to survey based on habitat, including seagrass cover and water depth. One must also choose the timing of the surveys very carefully to coincide with tides and sun glare on the water. The transects along which the pilot flies must be pre-selected and of the appropriate length and distance apart.

Once these decisions are made using scientifically sound reasoning, its time to get the plane in the air and find dugongs.

Our partners have been conducting aerial surveys along the east coast of Africa for decades. From Mozambique to Kenya, Dugongos knows the science. In a survey earlier in 2017, the team spotted eight dugongs (including a calf), 99 marine turtles, 21 sharks, 49 dolphins, 65 rays and 309 fishing boats.

On October 22, Dugongos reported the results of their latest aerial survey: 38 dugongs spotted.

These surveys will continue and eventually a robust picture of the dugong population will emerge.

Here are a few photos from one of their aerial surveys 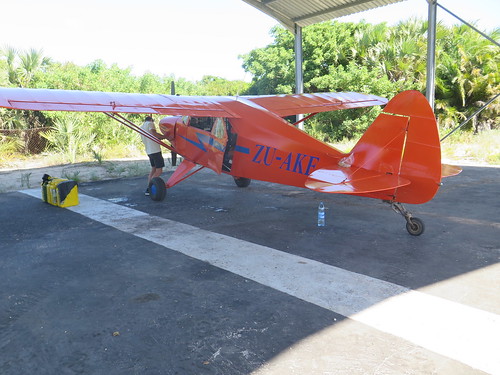 This news article relates to the project entitled The distribution of dugongs in the coastal waters of Mozambique (MZ2).. Click below to learn more about this project.