A Life-long Dedication to Dugong Research 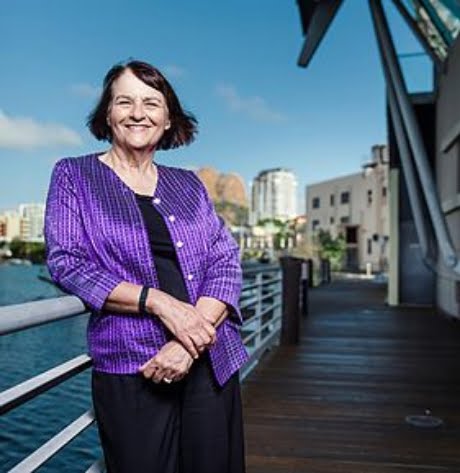 Helene is one of the world’s leading authorities on Dugong. She has been studying their biology and conservation for almost 40 years and her research has informed government policy in some 14 countries. Helene is a technical advisor to the GEF Dugong and Seagrass Project.

Why do you think people should protect them? What is their importance to all of us and to biodiversity?
Well, I think there are several reasons:
Firstly, they are one of only four members of the mammalian order Sirenia, or sea cow, and they are by far the most common of those and have the largest range. I always think about the extinction of a species as being like the loss of a leaf from a tree, but the loss of a whole Order is like cutting of an entire limb. The Sirenia are considered to be in danger of extinction and so I think it is really, really important that dugongs are conserved throughout their range.

The second reason is that they are culturally very important to people, and depending on where they are from they have very different values. There are whole cultures which relate to dugongs, from the Arabian Gulf through to northern Australia, where the dugong is the most important totemic (the belief that each human has a spiritual connection/kinship with another physical being, such as an animal or plant, often called a “spirit-being” or “totem”) icon.

And thirdly, they could be described as the gardeners of the sea, as they maintain the health of seagrass.

I can see from your work that you also work on indigenous people and their links to the environment. Could you please talk a little about the cultural significance of dugong?
The Torres Strait Islanders would describe dugongs as their ‘soul food’, something that is absolutely essential to who they are as people because, in some places, even now, they are a very significant food source.

If dugongs are so important, what caused the decrease of their populations and when did this mostly happen?
Well, there are different causes in different places. In many places, I think the most important cause is that in very poor communities, dugongs are often worth more dead than alive in many communities. When I say they are worth more dead than alive, what I mean is, if they are caught accidentally in fishing nets it is in the interests of the fishermen to kill them and sell the meat, not free them, because a dugong is a windfall for very poor people.

And in other places dugongs are just caught in fishing nets which no one knows about and, if they aren’t worth more dead than alive, it’s a big problem to get a dugong out of a fishing net, so people don’t do it. In a few places, not many anymore, direct hunting is a problem. In the future, dugongs are going to experience other problems in relation to climate change, and in a few places, vessel strikes are a problem.

As for when it happened, well again it depends on where. There are some places where the populations have been reduced for various reasons over time and now they face extinction because there is only a very small population remaining. For example, in Okinawa, Japan, what will probably kill the dugong population is that the military base will take over the last of their habitat. But that will be the last straw, if you like, because actually they have been reduced in that area for a very, very long time, as a result of hunting and accidental capture in nets. Now the population is so small that it is Vulnerable and their final demise is probably going to be habitat loss.

Can dugongs been seen as an indicator of the health of the environment?
Yes, I think they can, particularly in places where there is a problem with terrestrial runoff from the land threatening seagrass beds. In such a case, particularly if the volume of terrestrial runoff is coupled with a succession of severe storms, then the number of dugongs dying can be an indicator of the health of the seagrass habitat.

I probably should also mention climate change. Again, that is going to depend a lot on the area. There are some areas where severe tropical storms and cyclones are going to become more common, which will be quite a serious problem for dugongs. And then there are other parts of the range where those storms don’t occur and probably won’t occur as the climate changes. So, I think it is very important to distinguish threats to dugongs on the basis of location.

Knowing the challenges faced by dugongs and seagrass, what are indigenous community groups doing to prevent their extinction?
Well, again it really depends on location. In many places communities don’t even know there are any problems and so the level of awareness is very low. But in other places, people are starting to know more and do more. For example, when I first started working in Australia and said I was working with dugongs, people had no idea what I was talking about. But gradually I think that has changed and I think now the level of awareness is much greater.

Ok. So it means that really we have to focus on awareness raising?
Yes, I think so.

If you were a dugong, where would you say is the perfect place to live?
Close to the perfect place might be Shark Bay in Western Australia. There is a big population of dugongs there and it’s in a world heritage area. It’s quite remote – not too many people, and they are not hunted.

So is the population in good condition because they are not hunted or disturbed?
Well, what is very interesting is that in the Torres Strait, which is the dugong capital of the world located between Australia and Papua New Guinea, the population is still legally hunted by indegenous groups yet it is nevertheless in very good condition. This is interesting because aside from hunting, there is not much else causing a problem for dugongs, and indicated the importance of conserving good habitat for them.

Thank you for answering our questions. Would you like to add anything to the end of this interview?
I think that the GEF Dugong and Seagrass Conservation Project is very, very important because I think it is recognising, possibly for the first time, that in many countries you just can’t ban certain activities and expect this to make a difference. So I think that the project recognises that if it’s going to make a difference, we can’t just blame fishermen for killing dugongs. What we have to do is find them alternatives.